Share-out for the Nyame Nti, Abotare, and Boafo VSLAs

The first cycle for the Power to the Fishers (PTF) formed VSLAs in Otuam and Senya Bereku communities has ended on a successful note. Group members could not hold back their joy as they witnessed the share out of their savings.<<Read More 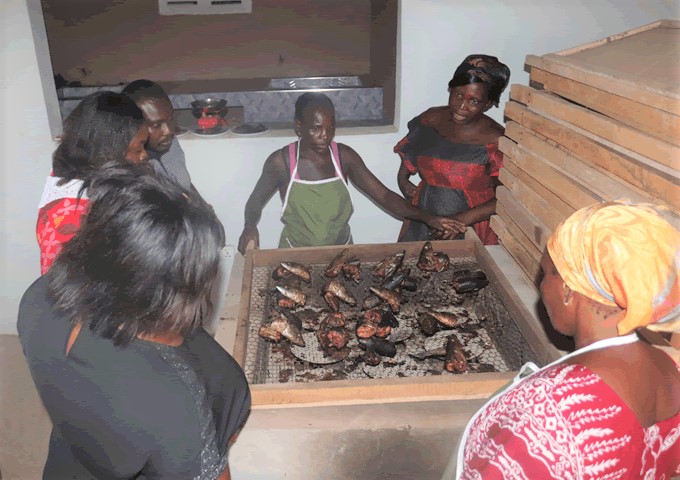 This past Friday, 1 April 2022, a delegation from the National Authorizing Office (NAO) (of the Ministry of Finance) and the Technical Assistance Team (TAT) embarked on a 1-day joint field visit to the EU-funded Power to the Fishers (PTF) project communities <<Read More

Downstream actors along many agribusiness value chains rely more on technology to serve their value addition needs. This is typically the case along the cassava value chain <<Read More

Coconut Husk: A Waste or A Raw Material? 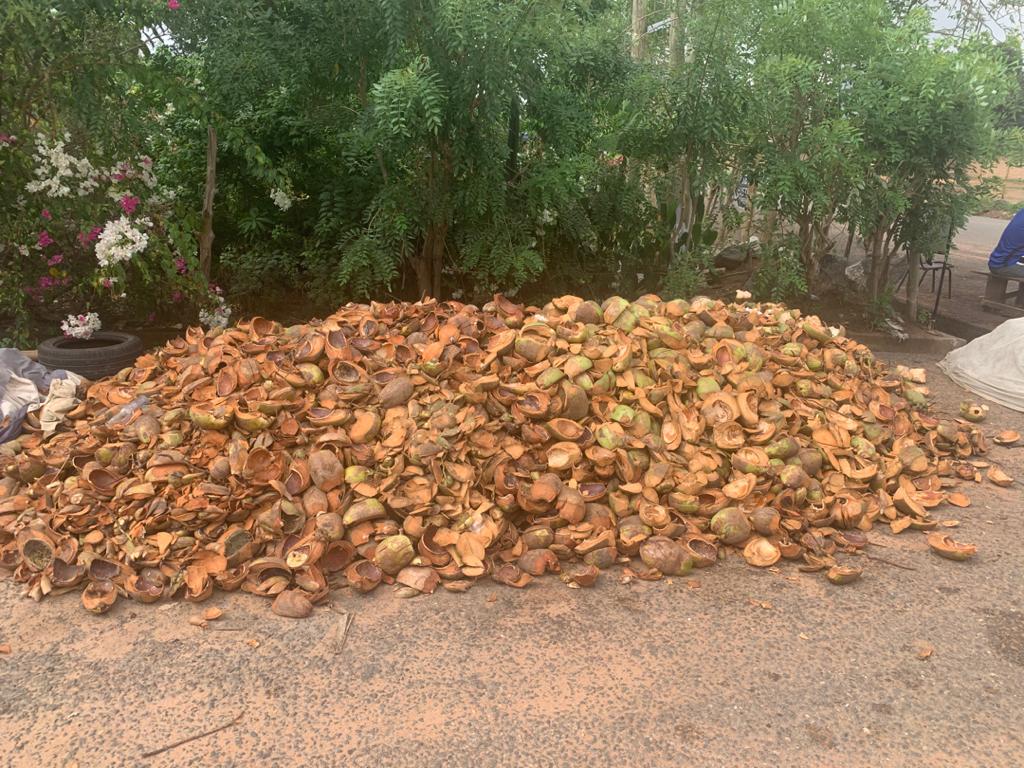 The daily average volume of coconut husk waste generated by coconut vendors within the La Nkwantanang-Madina Municipality is about 18 tons, according to the Coconut Waste Project baseline report, 2021. <<Read More

Extension service provision to farmers remains low within the agriculture landscape of Liberia. It is however important that any extension service training makes room for farmers to actively participate in the process involved in knowledge sharing and technique acquisition <<Read More

The Southeast of Liberia is widely known for being underdeveloped. The socio-economic condition which characterizes the landscape places marginalized groups like women, children, unskilled youth <<Read More

The ratio of extension officers to farmers in Liberia’s Southeast ranges between 1: 15000–30000, This results in minimal assistance and inadequate training on good agricultural practices (GAPs) for farmers <<Read More

What a joyous occasion it was for the ‘Ebenezer’, ‘Kuroyε’ and ‘Ɔkyɛso’ Village Savings and Loans Associations (VSLA) as members of these groups lined up to receive their monies. These three groups have completed their first VSLA cycle and had their share-out of the monies saved in their ‘mini bank’ after 9 months of saving. <<Read More 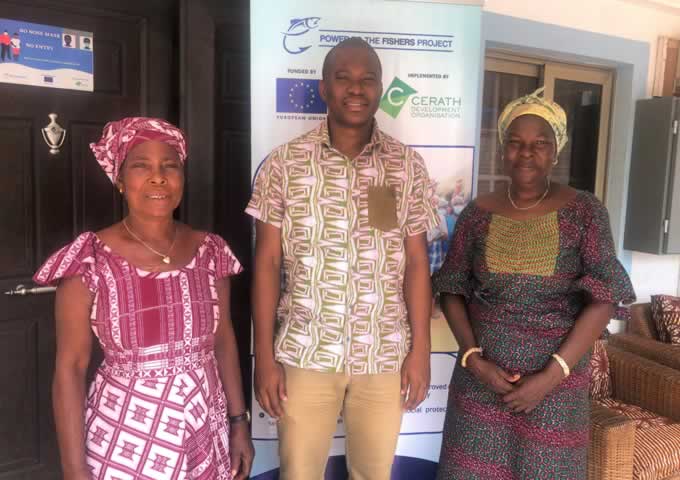 After 180 days of savings, 13 Village Savings and Loans Associations (VSLA) formed under the EU-funded Power to the Fishers (PTF) project have managed to raise Gh¢75,265. <<Read More 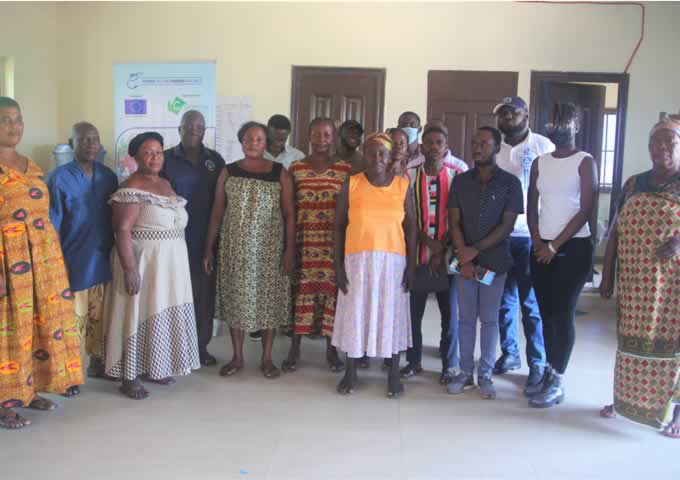 In the last week of November 2021, a reconnaissance visit to PTF communities was organized for the student researchers from the Centre for Coastal Management (CCM) of the University of Cape Coast. <<Read More

VALUING TOILETS – Is the World Making Progress in Faecal Management? 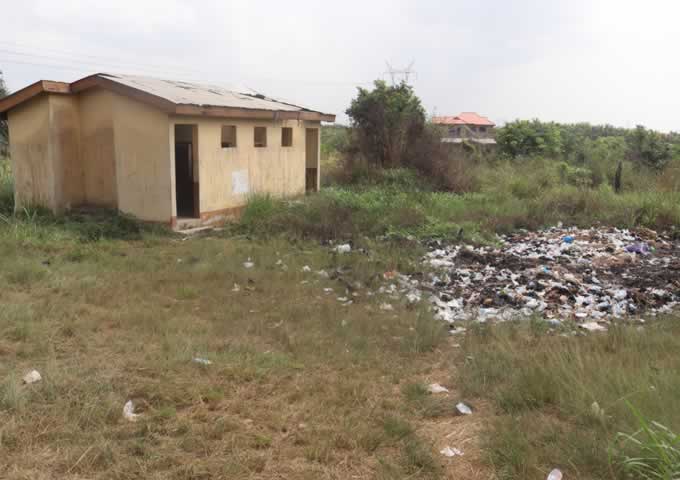 “Visualize a 9-year-old girl who wakes up in the middle of the night to attend to nature’s call and has to walk to a public toilet outside of her compound or to a nearby bush. Imagine the possible dangers and the inconvenience”.  <<Read More

The PTF Project Commences the Operationalization of the Fish Processing Centres 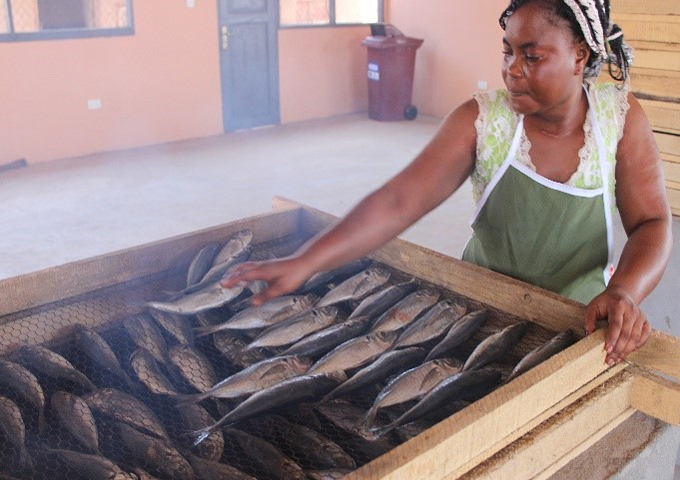 The Power to the Fishers project has commenced the operationalization of its constructed fish processing centres. Under the first phase of operationalization, the project team is piloting 3 centres out of the 6 that have been built. These 3 centres are located in the Senya Bereku, Winneba, and Kesewokan communities. <<Read More 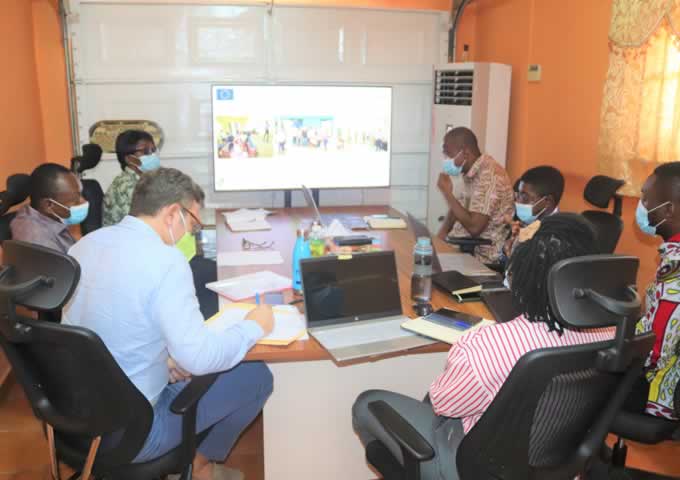 To assess the level of the implementation of the EU-funded Coconut Waste Project (COWAP), the European Union Delegation (EUD) to Ghana visited the COWAP team on the 9th of November, 2021. <<Read More

The EU Pays a Verification Visit to the PTF Project 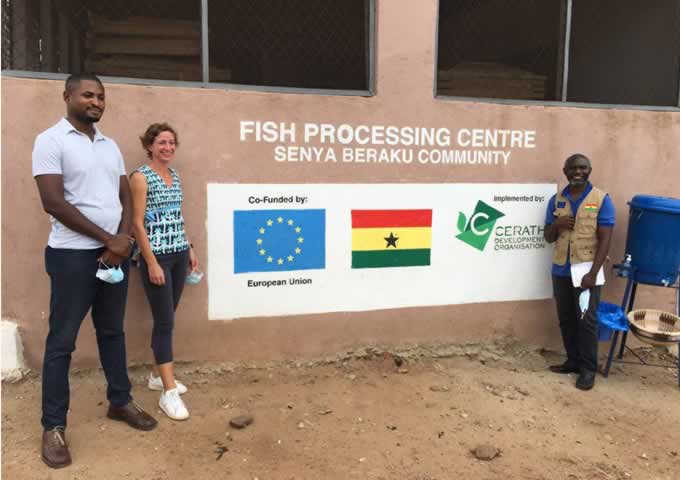 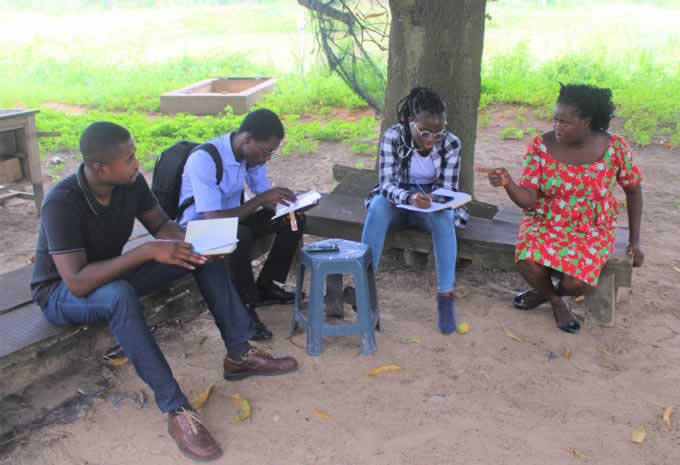 The PTF team embarked on a study tour to the Ashaiman Aquaculture Demonstration Centre. The objectives of the tour were for the team to explore the aquaculture production systems in Ghana, as well as understand the production dynamics in fish farming. <<Read More 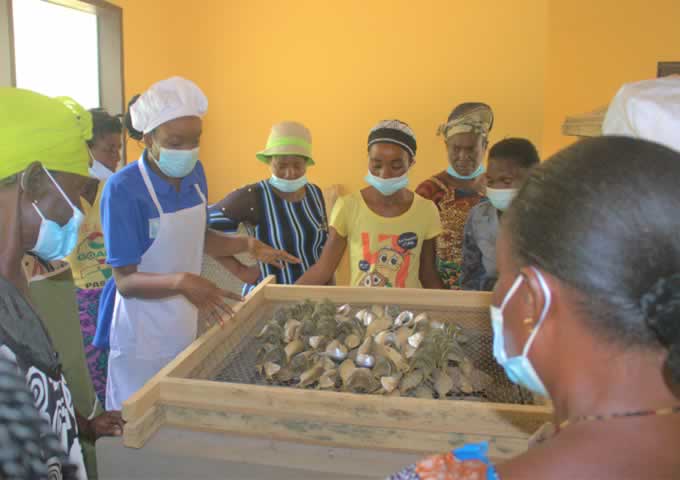 Handling fish hygienically is a process that starts after fish is captured and landed at the shore. Fish handled under unhygienic conditions is subject to microbial and chemical contamination causing illnesses related to foodborne diseases. <<Read More

A day with the )kyɛso VSLA 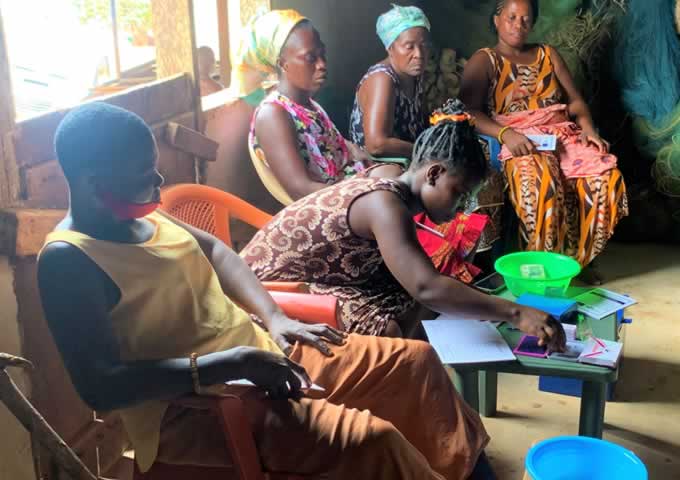 Meet the Ɔky3so Village Savings and Loans Association, located in the Dago community. As part of monitoring activities for the PTF Project established VSLA groups, the project team joined in their share purchase meeting. <Read More 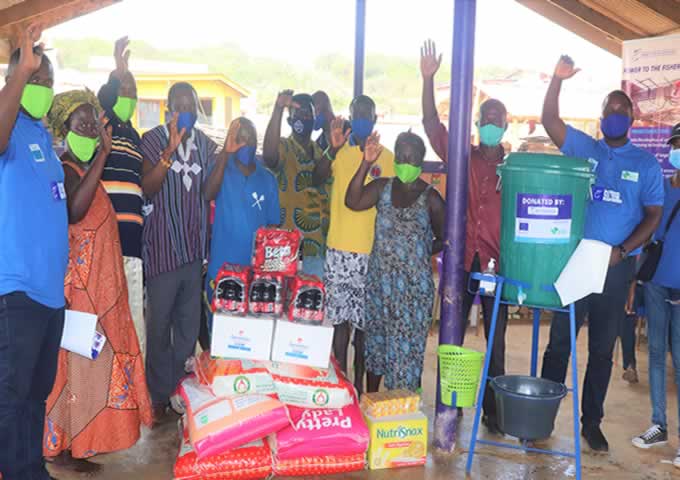 As we observed World Humanitarian Day yesterday, with the theme “Immediate Consequence of Climate Change“, we are also reminded of the stories and struggles that lie in front of aid workers and organizations in Ghana and across the globe. <<Read More 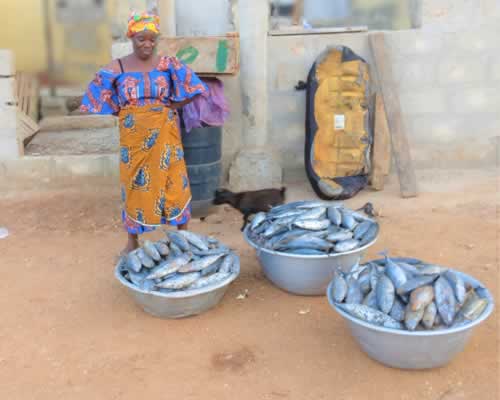 With the lifting of the 2021 closed season, Dago, a fishing community along the coast of the Central Region of Ghana, is bubbly once again with commercial activity. Having been made seemingly idle with the month-long closed season, Dago is back to life. <<Read More 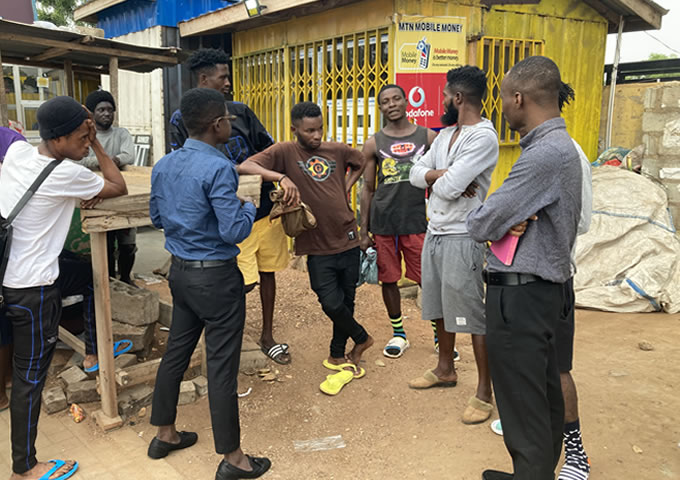 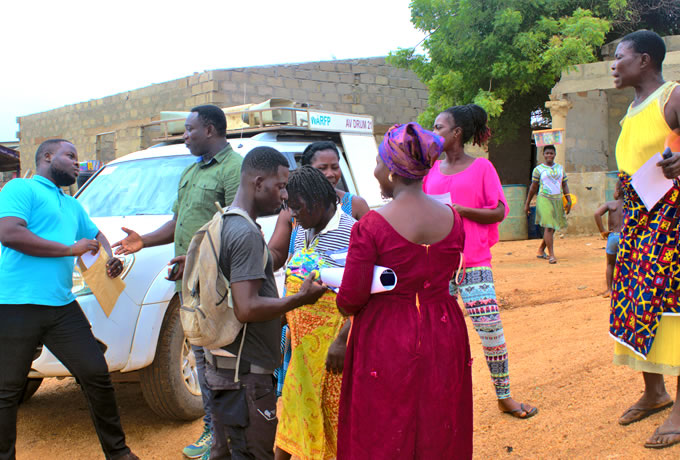 The EU-funded Power to the Fishers project partnered with the Central Regional office of the Fisheries Commission (FC) to embark on a week-long sensitization and awareness creation activities among fisherfolk in the Central Region on the upcoming 2021 closed fishing season. This was carried out from 14th to 18th June 2021 <<Read More 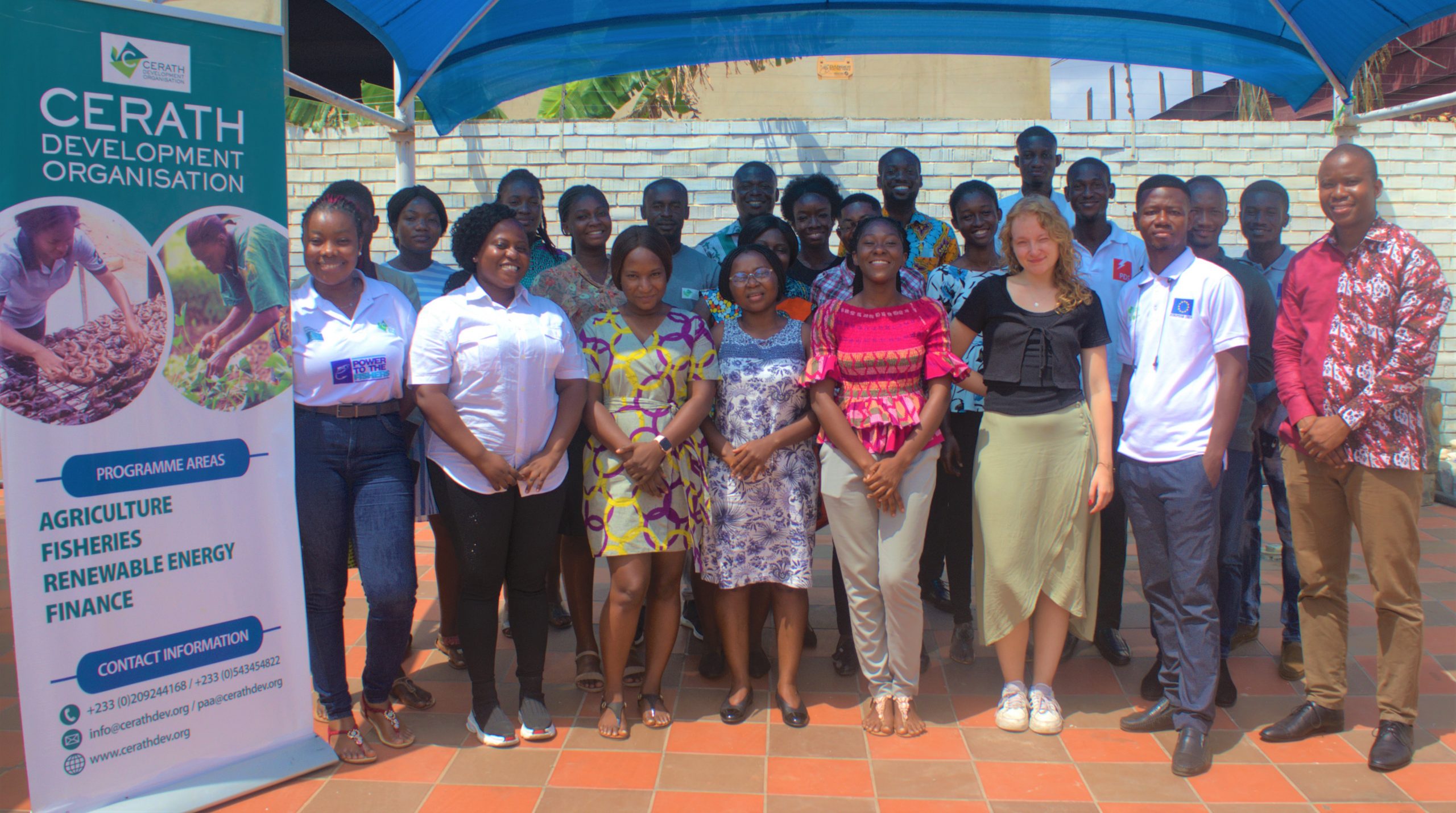 CERATH Development Organization celebrated its 3rd anniversary today the 18th of June 2021. The celebration began with the singing of psalms and hymns to thank God for all the blessings the organization has chalked within the space of 3 years. <<Read More 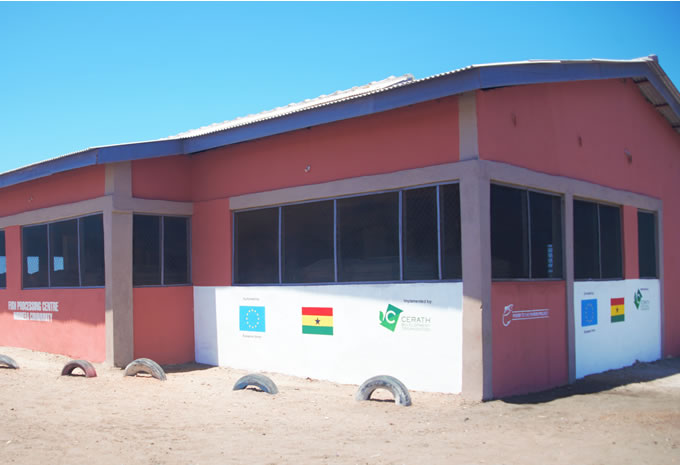 The Power to the Fishers (PTF) project has inaugurated two communal fish smoking centres in the Senya Bereku and Winneba communities. The event, which was held in both communities, saw in the attendance a representative of the EU Delegation to Ghana, Executive Director of the Fisheries Commission, officials of the Ministry of Finance, and the technical assistance team (TAT) for the CSO-RISE programme. Also present were the traditional councils of both communities, fisherfolk and community members. <<Read More 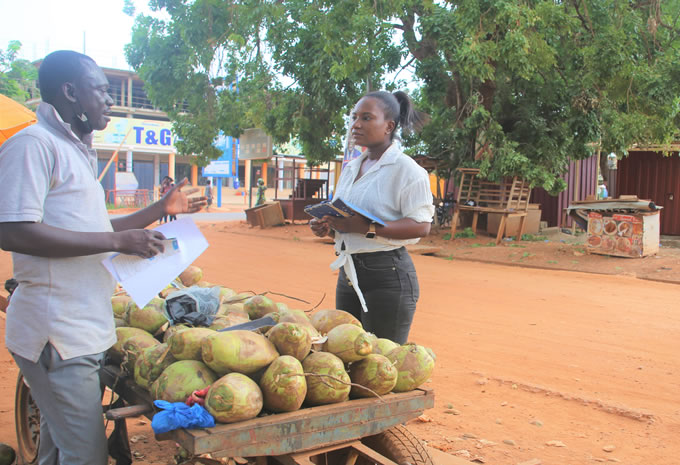 To understand the project context and inform implementation, the Coconut Waste Project carried out a baseline study within its project area – the La Nkwantanang Madina Municipality and its surrounding communities. <<Read More 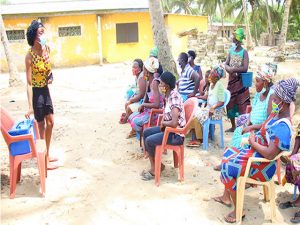 Accelerating women’s empowerment is intricately linked to the strengthening of the socio-economic livelihood of fishing communities in the coastal savannah zones of Ghana. The PTF project offers trainings to fisherfolk, especially women fish processors, in all the coastal fishing communities of operation within the five project districts in the Central and Western regions of the country. <<Read More

The EU-funded Power to the Fishers (PTF) project has established an agreement with the Centre for Coastal Management (CCM), of the University of Cape Coast, towards the enrolment of Master’s students as PTF student researchers. <<Read More.

The Coconut Waste Project Commences With Kick-Off Meetings With LANMMA 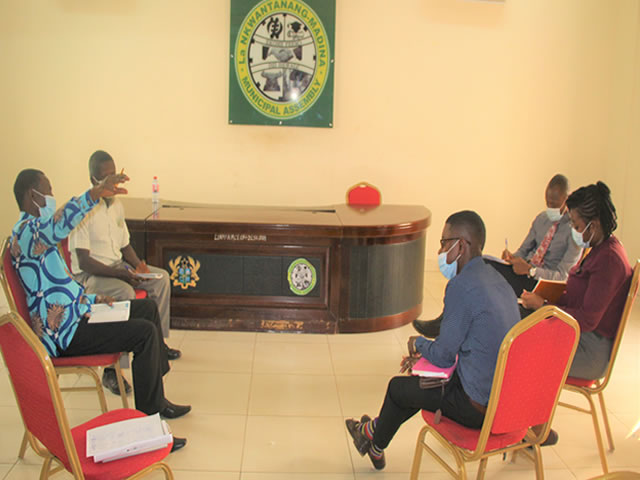 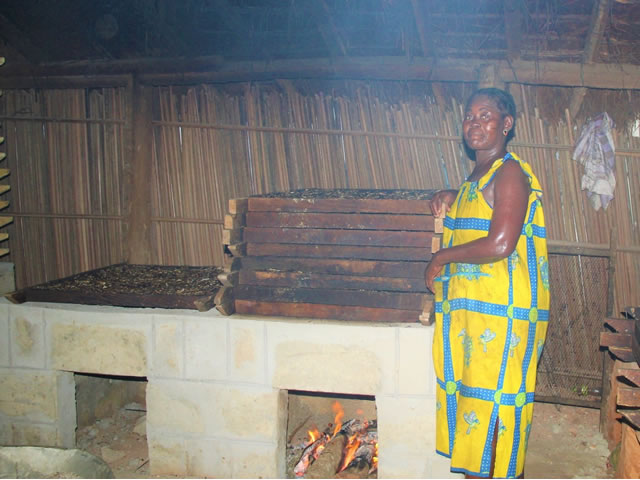 The use of the traditional mud-built fish smoking oven poses a plethora of health and economic challenges for many fish processors in Ghana. Some adverse impacts associated with its use include poor eyesight and respiratory problems caused by frequent exposure to smoke, high consumption of fuelwood, reduced fish quality, and nutritional value due to the high level of polycyclic aromatic hydrocarbons (PAHs) contained in fish smoked with the traditional ovens <<Read More 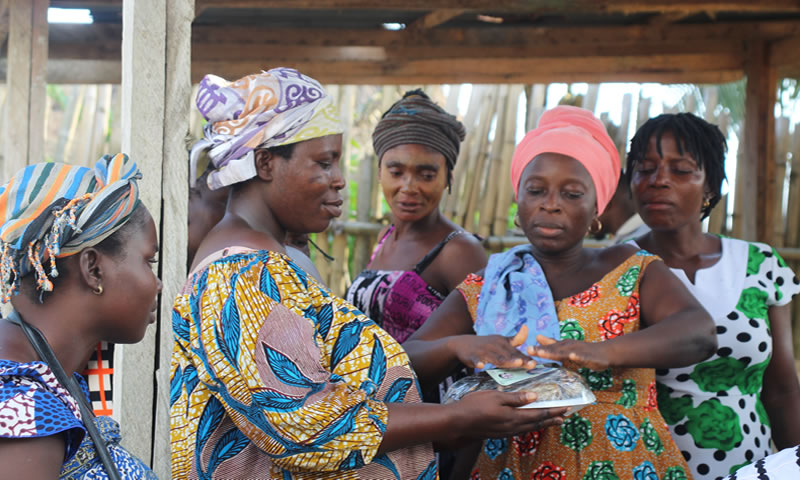 Across the beneficiary districts, over 300 female fishmongers have been trained on best fish handling practices, technology adoption, and occupational safety and health (OSH) by the Power to the Fishers project. The training has equipped fishmongers with the know-how in maintaining good hygiene when handling fish and making the most out of the energy-efficient ‘Ahotor’ oven. Furthermore, the training educated recipients on the relevance of packaging and branding of their smoked fish <<Read More 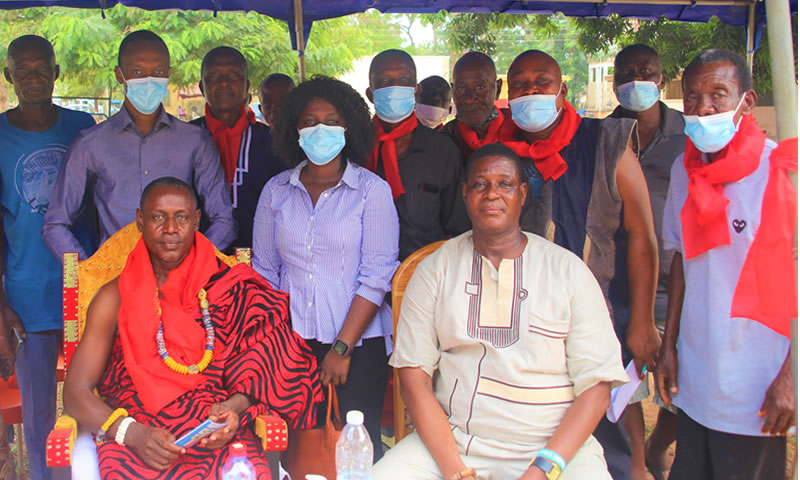 CDO Embarks on a Data Collection Excercise to Investigate the Social and Financial Inclusion of Fisherfolk. 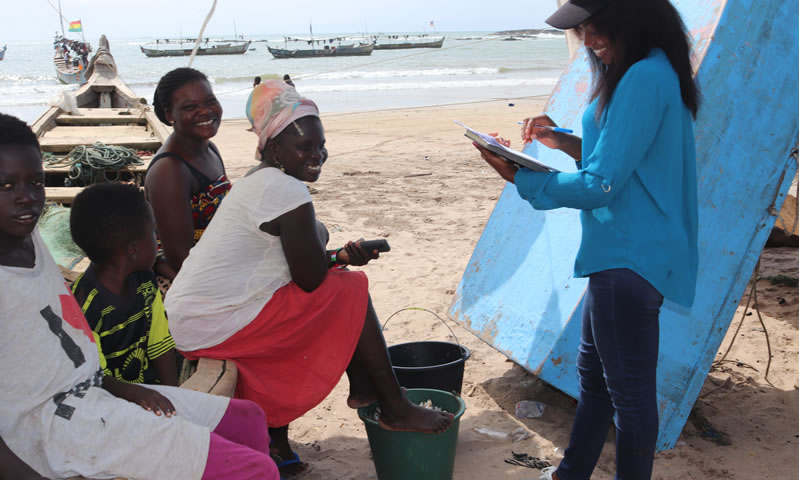 The project team of the Power to the Fishers has conducted a data collection exercise to investigate the social and financial inclusion of fisherfolk. The objective was to find out the perceptions, knowledge and adoption rate of fintech and social protection services among fisherfolk << Read more

Capacity Building on VSLA for the Power to the Fishers Project Team. 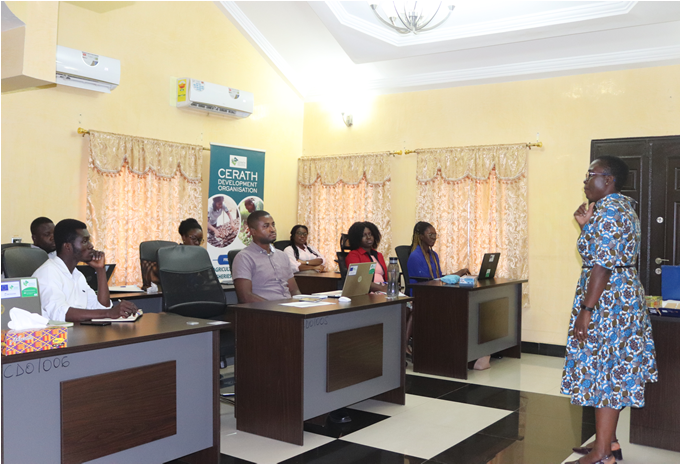 CERATH Development Organization had a two-day in-house training to build the Power to the Fishers Project (PTF) project team’s capacity on Village Savings and Loans Association (VSLA). This was to equip the project team with the needed capacity and techniques for the formation and management of VSLAs. This contributes to the provision of social protection services (savings and credit) to beneficiaries of the PTF project.  << Read more.

The EU-funded Power to the Fishers Project donates PPEs and Relief Items to the Awutu Senya District. 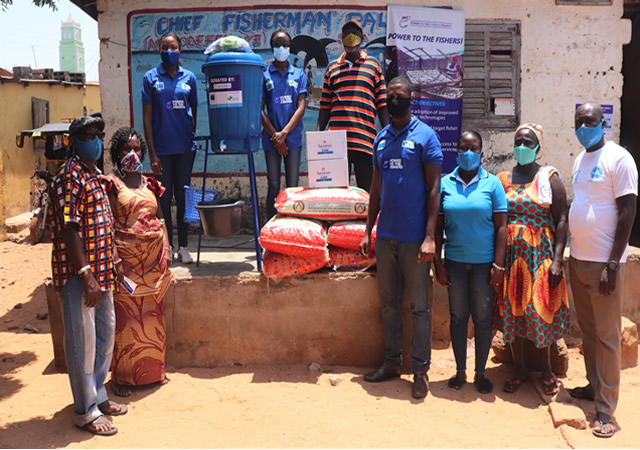 Project beneficiaries (fisherfolks) in the Awutu Senya District were sensitized on the COVID19 pandemic, and measures to prevent its transmission. The project manager, Derek Adabie, led the discussion on the spread and symptoms of COVID-19, as well as its preventive measures (which include practical ways of ensuring social distancing). He further carried out demonstrations on the appropriate use of PPEs, handwashing with soap under running water, and the application of alcohol-based sanitizers. The activity ended with a donation of bags of rice, hand sanitizers, nose masks, and veronica bucket to the community. The project team with the help of community folks pasted posters of COVID-19 related information at vantage points in the community.  << Read more about this story. 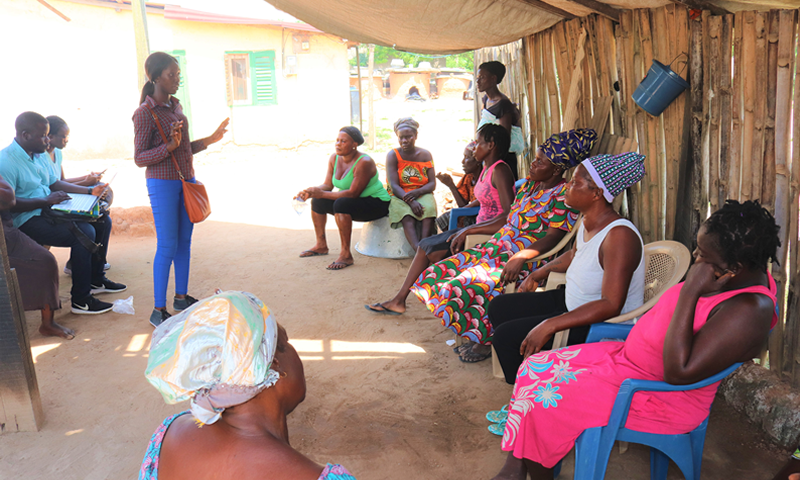 Study Tour Organized For the Power to the Fishers Project Beneficiaries 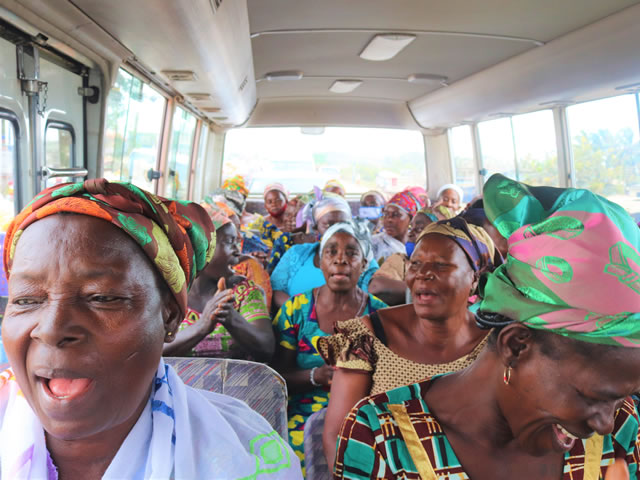 The Power to the Fishers project, funded by the European Union, organized a study tour to the Central and Western Fishmongers Improvement Association (CEWEFIA) compliance facility. This was organized for 75 lead fishmongers, all being women, in the project’s beneficiary communities <<Read More

Children of the Landfill sites 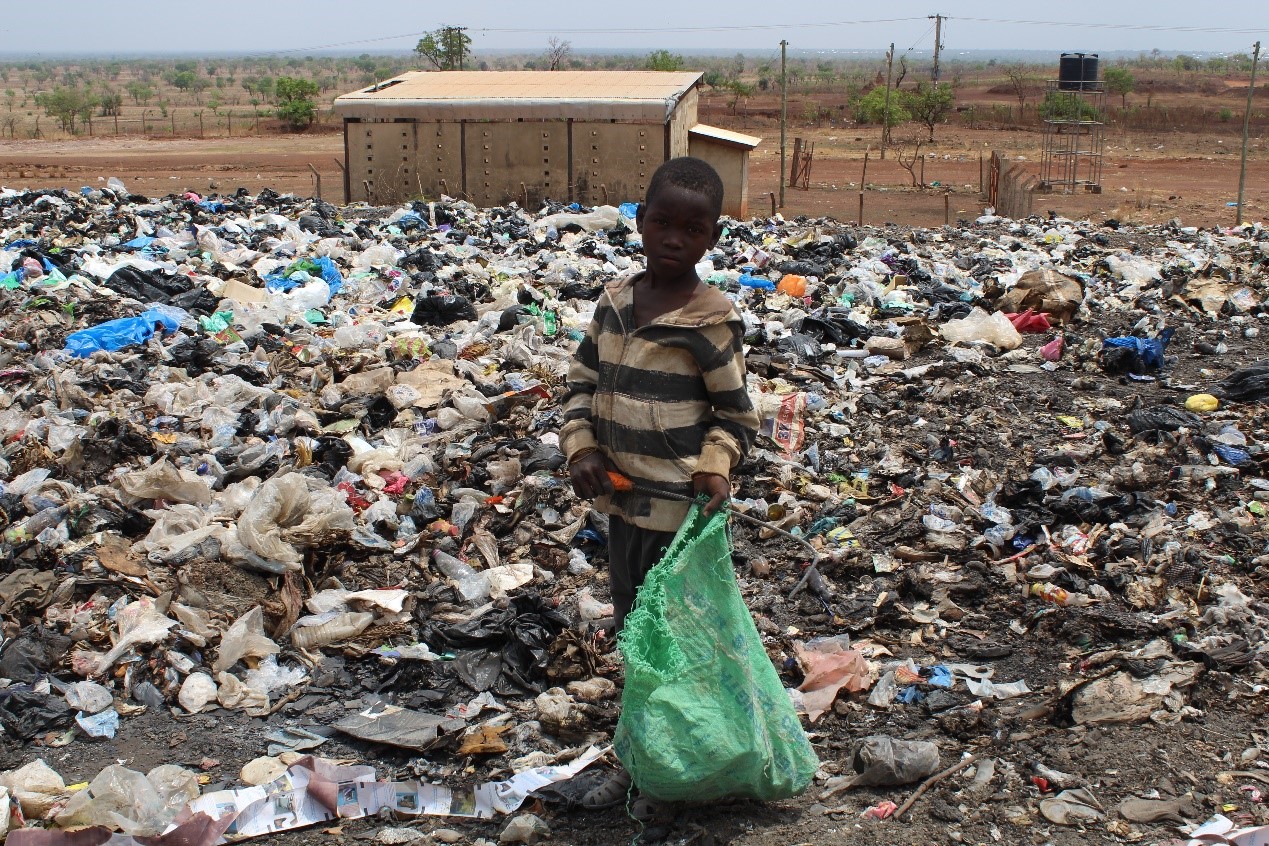 Waste picking has been a source of livelihood for many poor people across the globe since antiquity. However, modern trends in waste picking took root during industrialization in the 19th century. Waste picking has become a popular occupation in Tamale because of the tons of waste produced every day. Waste picking provides work to the unskilled, underage, and poor. The combination of large amounts of waste and abject poverty creates the ideal condition for children to be pushed into work. Working as a waste picker comes at a cost, especially if you are a child as it stops children from attending school and deprives children of their health. It also leaves such children more vulnerable to abuse.  << Read more about children of the landfill sites