What a joyous occasion it was for the ‘Ebenezer’, ‘Kuroyε’ and ‘Ɔkyɛso’ Village Savings and Loans Associations (VSLA) as members of these groups lined up to receive their monies. These three groups have completed their first VSLA cycle and had their share-out of the monies saved in their ‘mini bank’ after 9 months of saving.

The three groups managed to raise a cumulative amount of Gh¢20,760. The Ebenezer VSLA, located in Mankwadze, raised Gh¢9,140; whereas the Kuroyε and Ɔkyεso VSLAs, both in Dago community, raised Gh¢4,830 and Gh¢6,790 respectively. 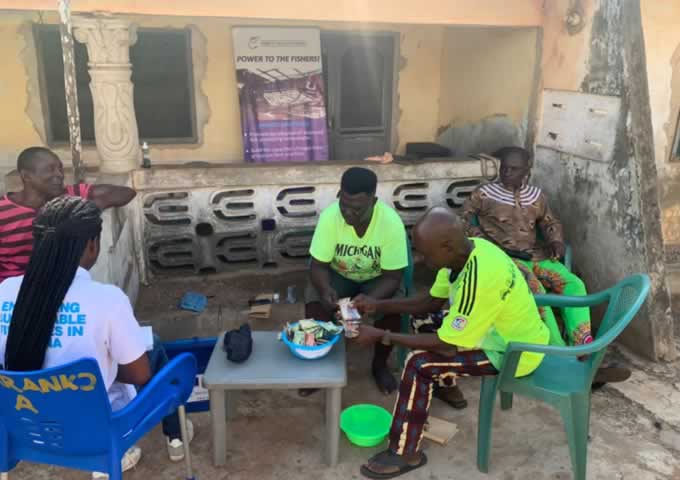 With the assistance of the project team, the groups were taken through the procedure for a share-out meeting. Monies contained in the loan fund were counted, followed by a summation of all shares bought during the cycle. The loan fund was then divided by the total number of shares to arrive at the share-out value of a single share. To determine the amount to be received by an individual, the share-out value was multiplied by the total number of shares the member purchased. The highest amount given out at share-out was received by the highest contributors. The highest contributors from the Kuroyε, Ebenezer, and Ɔkyεso VSLAs received Gh¢750, Gh¢970, and Gh¢1,400 respectively.

Smiles could not be hidden from members’ faces as they were elated with the amounts they had raised and the portions they received from their diligent saving attitude. Seeing the importance of the VSLA, the members were determined to regroup for another cycle.

On the other hand, Akua Eson, chairperson of the Ebenezer VSLA had this testimony to give:

“After 9 months of saving, I have been able to raise Gh¢970.00. Also, in the course of the cycle, I was able to complete my house with a loan I took from the group. I have seen the potential of the VSLA and I cannot wait to start the next cycle to save some more money for my household and business”