Sources of Inputs among Groundnut and Cowpea Farmers in Ghana 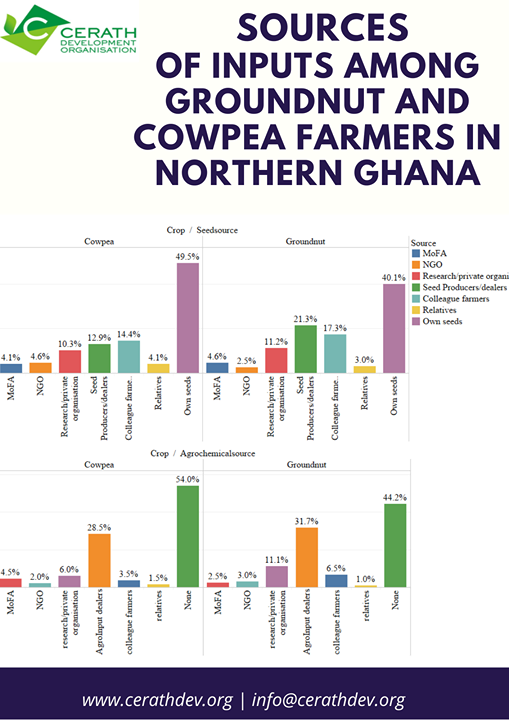 Cowpea and groundnut are important cash and staple crops in Northern Ghana and their cultivation is dominated by small scale farmers equipped with traditional tools coupled with limited usage of production technologies such as fertilizer, improved seeds and, pest and disease control measures.

A study carried out by CERATH Development Organization (CDO) in northern Ghana revealed that about 80% of the farmers did not use certified seeds (cowpea and groundnut seeds). The results also showed that farmers who use certified seeds sourced them from colleague farmers (31.7%) and seed producers/dealers (34.2%). Meanwhile, about 89.6% of groundnut and cowpea farmers used seeds from their previous harvest.

Also, 78.2% of the farmers did not use fertilizer. On the other hand, the majority of farmers (60.2%) who use fertilizer sourced them from agro-input dealer shops in local community markets. These findings imply that the use of inputs among groundnut and cowpea farmers is still very low despite the introduction of improved seeds and fertilizer. This may either be attributed to the high cost of inputs, lack of access to these inputs or lack of knowledge on the use of fertilizer.

Previous CERATH Embarks on a COVID-19 Sensitization Exercise & Relief Donation to Fishing Communities.
Next Means of Transportation for Groundnut and Cowpea Actors in the Northern Region of Ghana